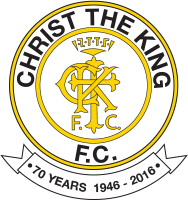 Christ the King Football Club is celebrating its 70th anniversary in 2016, and we would like to take the opportunity to thank all of the current and ex-players and supporters past and present for the support shown to us over the last 70 years. Without your on going support, commitment and passion for Christ the King Football Club we would not be one of the top amateur football clubs in the City.

Founded in 1946 by parishioners of Christ the King the club has gone from strength to strength since its inception. What started out all those years ago as a team of young men has now grown to an extent that 31 junior teams and 3 senior sides take to the pitch on a Saturday or Sunday decked in the long standing red and white stripes of the Kings.

The club is well known and respected throughout the Birmingham FA and John Bryan Sunday league and has achieved success at all levels, landing the major trophies within the Coventry Premier League and remaining undefeated at the Ricoh Arena winning the Coventry Telegraph Challenge Trophy and Coventry Charity Cup.

We aim to celebrate our 70 year history during 2016 by organising a number of events throughout the year and we would like all ex players, supporters, associates, sponsors and anyone involved with the club over the years to join us in our celebrations.